The ancient Mens Sana in Corpore Sano has been tested by the latest technologies and observed through Magnetic Resonance, to come out stronger and more modern.

In recent years there has beenaccumulating evidence for a link between physical activity, specifically aerobic, and different capabilities at brain level.

It seems, in general, that the practice of aerobic activity could stimulate the production of new neurons and synapses (i.e. connections between neurons themselves), increase the volume of certain brain areas and also improve the brain’s elasticity.

A larger area of the memory, more neurons, more synapses

Why, with the passing of years, does memory decrease?

The causes are many, and among them, there isthe decrease of the volume of a specific part of the brain, the hippo-campus, associated with long-term memory and the capability of orientation in space.

Although it is associated with aging, our lifestyle can also have a significant influence in this case.

Aerobic exercise, if practiced consistently, has in fact been proven not only to reverse this trend, but also to stimulate the release of a substance, called BDNF, which fosters the production of new neurons and new synapses, improving learning capabilities.

A confirmation of the potential of aerobic activity in increasing the volume of our brain, in particular in the areas related to memory, has also occurred in cases in which this type of effect is most important for the quality of life.

Magnetic resonance conducted on 29 elderly women who lived independently with slight memory problems, pointed out that consistent exercise can stop the shrinkage of the hippo-campus due to ageing.

Having an “elastic brain” is an advantage that we usually associate with youth.

The elasticity of the brain, its “plasticity” – the ability of neurons to “change” as a result of experience – is in fact fundamental for the phases of adaptation, learning and functional development.

A recent Italian study, conducted by researchers of the University of Pisa and the CNR Institute of Neuroscience of the same city, wanted to investigate whether practising aerobic activity could also modulate this fundamental capability of our brain, which is actually high in childhood and more limited in adulthood.

To represent aerobic exercise, the authors have chosen to make the adults of the study perform one hour of activity on exercise bicycles, and then checked the effect of the activity on some aspects of visual perception that are particularly associated with brain plasticity.

The results were so convincing that they made the authors think, for the near future and after appropriate examination, about a possible application of the aerobic activity even in the clinical field, for those cases in which a higher plasticity of neurons can lead to an improvement of health. 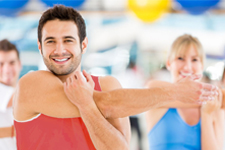 Resolutions for 2016: Move more Learn more
Back to top